Week 2 – An American Tour Star Gets His Revenge … 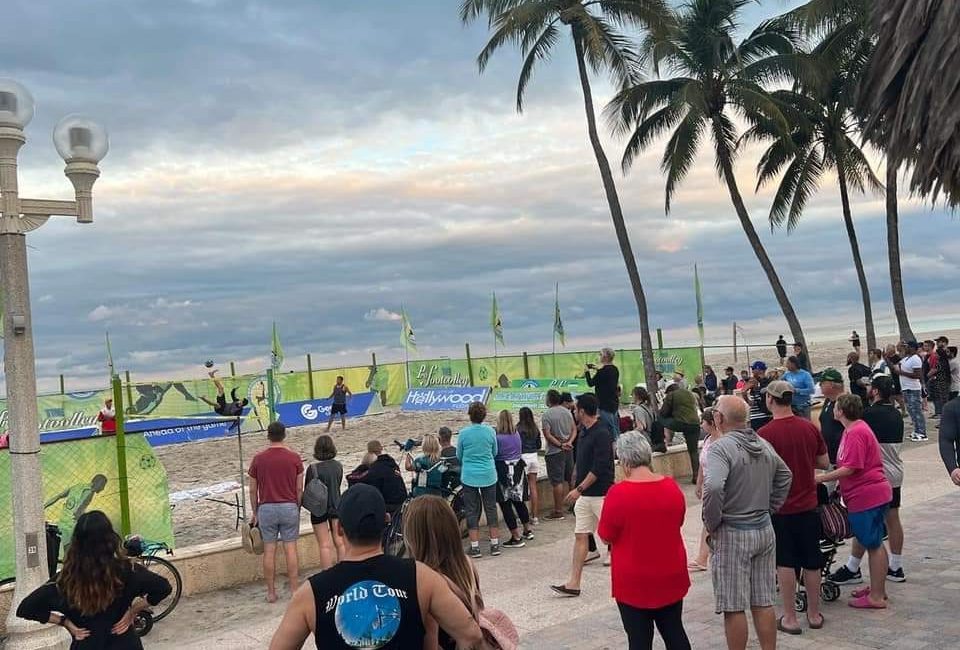 To Whom Much is Given, Much is Required

William Lobato, also known as SuperBoy, is considered by many to be America’s number #1 footvolley player.  Until today; however, he has had a nagging problem:  his inability to beat the other American ‘WunderKid’ in Jonathan Silva.  Lobato, from Pembroke Pines, FL, hadn’t beat the 19-year old Silva since June of 2021.  Since then, Silva who has formed a nearly unbeatable partnership with Moises Davalos, the SuperBoy has kept the namesake; but with zero Championship trophies to show for it.  That changed this afternoon on a post-rainy, yet cloudy over-cast Hollywood Beach, FL.

‘It’s not enough to simply reach the finals.  Our goal is always to win it all.  It’s been hard; but finally today we got that monkey off our backs!’
– Will Lobato after Winning Week 2

In an absolutely breath-taking Championship Match, Lobato and Victor Martinez won by the slightest of margins against the defending Champions Moises Davalos/Jonathan Silva.  The match needed to go to extra points as it remained tied at 24.  Call it luck, or fortune; but today Lobato/Martinez were able to show why this team is still a force to be reckoned with.

‘Will is the best American player I have seen.  Today he proved that.  He remained calm, and cool, throughout the match.  For all the athleticism in footvolley – you still win with your brain.’
– Victor Davalos after the Championship Win

In what was a difficult day for tournament organizers, rain in the morning; but it cleared up around Noon – matches went as planned; but were delayed at the start.    The Semi-finals saw severe dark-horses Bruno Baiao and Candido Silva face Davalos / Silva.  The favorites had no problem advancing to the title match with a 25-15 win.  In the other semi-final match, Lobato/Martinez had to fight off Santos/Gomes 25-21.  Leo and Thiago played tough; but not enough to over-come the eventual champs.

‘We felt we had a good chance to reach the Final.  Nobody wanted to face Silva/Davalos; but unfortunately we couldn’t get past Will and Victor.  Today it was their day no doubt about that!’
– Leo Gomes after the Semi-Final loss

Silva/Davalos remained upbeat after the Championship Match and offered praise to their opponents.  Silva was phenomenal.  Davalos as well.  Shameful that somebody had to lose.

‘It’s never easy repeating a Championship on the Tour.  You have to give them credit too.  We played the best we could yet still came up short.  That’s the Tour for you!’
– Jonathan Silva