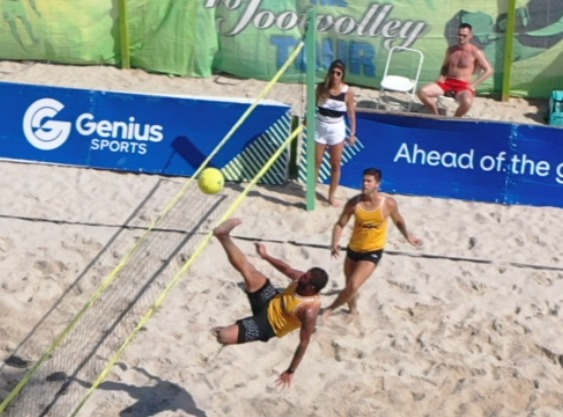 As the rest of America is under frigid conditions, down in South Florida it is a different story.  The mild temperatures have returned and that couldn’t have been anything but an absolute treat for staff, and athletes, of the Pro Footvolley Tour.    Matches started after a windy Friday postponed the start till Saturday morning.

As in the norm, the Tour began with a few exhibition matches before kicking off the tournament.   Heavy favorites Davalos/Silva paired up once again and breezed through Group A.
In Group B, Martinez/Lobato looked sharp as well as the duo went undefeated as well.   A potential collision of heavy weights is expected tomorrow.  Other teams that showed promise were the Mendonca brothers and Oliveira/Lopes.   In Group A, the youngsters Toledo/Tavares were eliminated while in Group B Caio/Sodre won’t see action on Sunday.  Veterans Souza/Avila narrowly advanced while in Group B Paes/Gomes played well enough to stay alive for Sunday as well.

‘Not the longest Winter break.  Let’s be honest.   The Tour athletes look fit and ready to challenge for the Title.  We feel we have the best team here and have nothing on our mind except winning the Title’ – Jonathan Silva

‘We knew that Danny and Nick were good; but we had no idea how good!  Easily a team to be reckoned with on the Tour’
– Bernardo Avila after his team’s loss to the Mendonca brothers

The competition resumes tomorrow with teams advancing to the super six.  Two play-in matches advance winning teams to the semi-finals.

On one side, Lobato/Martinez breezed through Group B and finished undefeated.   The best match of the day happened in Group B as Lopes/Oliveira came back to upset Paes/Gomes in a tight thriller.  Despite losing the match, the title contenders Paes/Gomes remained upbeat.

‘It was a difficult match – sometimes you lose by the slightest of margins – but I think we will bounce back tomorrow stronger.’  – Lucas Paes

Match Recaps, from today, are available at the Official Pro Footvolley Tour Youtube page.
Below we have Davalos/Silva vs Souza/Avila.